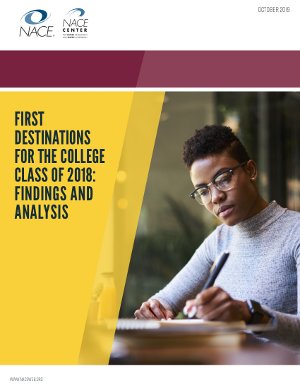 Class of 2018 business graduates at both the bachelor’s and master’s levels fared well in the job market, and those seeking a seat in an advanced degree program also enjoyed success, according to results of a nationwide survey conducted by the National Association of Colleges and Employers (NACE).

Outcomes at the Bachelor’s Degree Level

NACE’s First Destinations for the Class of 2018 report shows that nearly 68 percent of bachelor’s degree graduates earning business degrees were employed full time by a traditional employer1 within six months of graduating. The study also found that nearly 12 percent of business graduates at the bachelor’s degree level had secured a spot in an advanced-degree program within six months of graduation. Less than 12 percent were still seeking either employment or a place in an advanced-degree program in the same time frame.

In comparison, less than 55 percent of all Class of 2018 bachelor’s degree graduates were employed full time by a traditional employer at the six-month mark, and, overall, 14 percent were still seeking employment or acceptance for further education.

Results for Class of 2018 business graduates also compare favorably with those posted by Class of 2017 business bachelor’s degree graduates, except in terms of starting salary, as 2018 graduates lost some ground. (See Figure 1.)

Of course, outcomes varied by major. Accounting undergraduates, for example, earned an average salary of $51,783, and approximately 58 percent were employed full time by a traditional employer—results that fall below those of all business majors. However, more than 24 percent had secured a place in an advanced-degree program, far ahead of the average for all business majors, and accounting majors were a little less likely than their peers to still be looking for a job or a seat in an advanced-degree program (11.2 percent) at the six-month, post-graduation mark.

In contrast, results for finance majors at the bachelor’s level exceeded those for business majors as a whole in terms of full-time employment with a traditional employer (70.6 percent) as well as average starting salary ($55,138). However, these graduates were slightly more likely than other business majors to be seeking a job or placement in an advanced degree program (12.4 percent).

Again, major played a key role in determining outcomes results. For example, 81 percent of Class of 2018 M.B.A.s were employed full time by a traditional employer, less than 7 percent were still seeking employment, and the average starting salary was $74,949.

The outcomes were nearly identical for earning an advanced degree in accounting: More than 81 percent were employed full time by a traditional employer, and less than 7 percent were looking for a position. At $54,307, however, the average starting salary for these students was much lower than that of their M.B.A. classmates.

Additional Results for the Class of 2018

NACE’s First Destinations for the Class of 2018 is available free of charge on the NACE website; an interactive dashboard, displaying results more nearly 20 business majors at the bachelor’s and master’s degree levels, is also available.

First Destinations for the Class of 2019

1 NACE uses “traditional” employer/employment to differentiate such positions in which the graduate works for an employer with relatively steady work hours, a defined wage/salary, and a presumption of benefits from contract, temporary, freelance, or entrepreneurial positions.

About the First-Destination Survey: The survey on which First Destinations for the Class of 2018 is based covered students graduating from colleges and universities from July 1, 2017 – June 30, 2018. The survey was conducted from July 1 – December 30, 2017, and data were reported to NACE through April 2018. Details about methodology are included in the report.

First Destinations for the Class of 2018, the fifth iteration of the annual first-destination survey conducted by NACE, examines how Class of 2018 graduates—from the associate through the doctoral level—fared initially in their professional life. The report provides a baseline for assessing where graduates at the undergraduate and graduate levels land within six months, on average, after receiving their degree.

This translates to results for:

To NACE’s knowledge, this represents the most comprehensive view of graduate outcomes currently available. Details about methodology are provided in the report.

About NACE: Since 1956, the National Association of Colleges and Employers (NACE) has been the leading source of information about the employment of college graduates. For more information, visit www.naceweb.org.

by Mimi Collins
Mimi Collins is the director of content strategy for the National Association of Colleges and Employers (NACE). She can be reached at mcollins@naceweb.org.